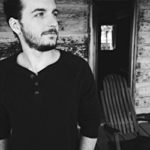 Scott Hale has always been obsessed with all things horror. While it’s not uncommon for his writings to blend multiple genres together, Horror is ever-present, be it in the scenarios themselves, or the uncomfortable truths he dares to explore.

Scott is the demented mastermind behind The Bones of the Earth series. Six books and four years later, the series has come to an end, but his addiction to writing has not. With more books on the way (In Sheep’s Skin, The Body is a Cruel Mistress, and Sickness in the Stars), it won’t be long until you’re invited to explore his grotesque, imaginative, and oddly beautiful worlds.

Scott is married to his wife, Hannah – his muse, frequent collaborator, and illustrator for his work. He has a masters in Social Work and is currently practicing in a psychiatric hospital.